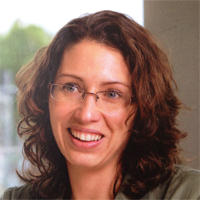 Anna Hearne
Private Practitioner, Auckland, New Zealand Lecturer at Auckland, Massey and Canterbury Universities, New Zealand.
Anna Hearne is originally from Germany, but she became a speech language therapist in Australia. She returned to her hometown of Munich, Germany to complete a Masters at the Ludwig Maximilian Universitaet. During this time she began introducing the Lidcombe Program to Germany with her colleague Christina Lattermann. She began specialising in the treatment of stuttering when she commenced her PhD studies in 2002 at the Australian Stuttering Research Centre. She investigated the experiences of adolescents who stutter. Since then she has filled many roles including research assistant and clinician at the Australian Stuttering Research Centre, clinician at the Stuttering Unit in Bankstown, Sydney, clinical director at the Stuttering Treatment and Research Trust in Auckland as well as clinical educator and lecturer at Maquarie University in Sydney. She currently lectures in stuttering at Auckland University, Massey University and Canterbury University in New Zealand. She is also working in her private practice. In addition to New Zealand, Anna conducts workshops in Germany with her colleagues Bettina Freerk and Christina Lattermann.